Double T- Fisherman’s knot ... is the “Go-to” when you have time.  It is tied the same as the traditional double fisherman’s but with both terminal ends facing the same direction.  This allows the knot orientation to be directed up, minimizing snagging when the rope is moving over surfaces (i.e. lowering or pulling rope).  This is similar to the EDK. The overhand variations (EDK) rely on friction while the fisherman’s is based on the principle of “form-fitting, which most engineers agree is more stable.  The DT-FK presents superior to the other in dimensional stability (no rolling or deformation occurs), and reached maximum tensile forces between 2100-2800 daN (or 21-28 kN). 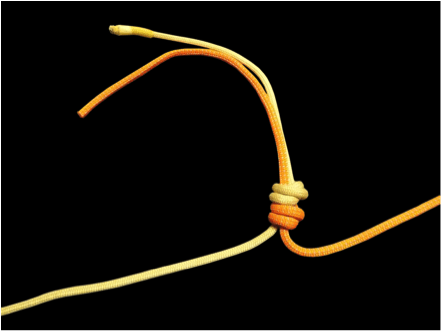